[This relates to my recent post about 'cheeky Nando's'. If you want to take the survey, do so here. We'd be really grateful!]

Do you call a misbehaving child a cheeky monkey? Do you ever go for a cheeky beer after work? Would you take your Significant Other out for a cheeky Valentine's Day dinner at a nice Italian restaurant? Chances are you said no to the last question, not because you wouldn't make such a romantic gesture, but because cheeky doesn't sound right in that sentence. What's more, if you're from the United States, you probably aren't as keen on the word cheeky in the first place. At least that’s what we thought when the cheeky Nando’s meme went viral a few weeks ago.

The cheeky Nando’s meme  involved British internet users coming up with ever more incomprehensible (to Americans) explanations of what a cheeky Nando's means. But how come Americans don't know what it means? And, actually, what does it mean? We tried to find out by sciencing.

Who’s we here?  Dr Laura Bailey and Dr Mercedes Durham, two linguists based in the UK. Laura is a British English speaker at the University of Kent, while Mercedes is a Swiss American at Cardiff University. Both of us have used Twitter in our research before, Mercedes more extensively in her work on attitudes to Welsh accents. When the links to the cheeky Nando's meme began to circulate, Mercedes got in touch with Laura, who had previously done a survey on the use of 'because X' via Twitter and suggested we take this opportunity to find out more about cheeky and how it's used.

Our gut feeling was that the meaning of cheeky has expanded and this was happening more in the UK than in the US.  In terms of definitions of cheeky, there’s the older meaning, which you find in the OED and other dictionaries, where it’s used for a child or possibly to mean they’re a little bit naughty or rude. Then there’s the cheeky Nando’s version, as exemplified in the following tweet: ‘One of life's pleasures is a cheeky nap in the afternoon.’ A nap cannot be rude or naughty, but you can be a little bit naughty for having a nap, so the cheekiness is not a quality of the thing itself, but of the speaker.

What we did to see what was going on was create a Google Forms survey that had sentences of 4 different types:


People were asked to rate the sentences between 1 and 6, with 6 being the most natural and 1 being the least. The form also asked people to give their age, sex and where they were from (mainly to see if there’s a UK/rest of world difference). We put the link to the form on the internet, and waited. We got around 150 responses over the next couple of weeks. We found that people confirmed our intuitions, but that there’s also a lot more going on. We haven’t looked at everything in detail yet, but we thought we’d share some of the main points that came out overall, between UK and US speakers and across different ages. 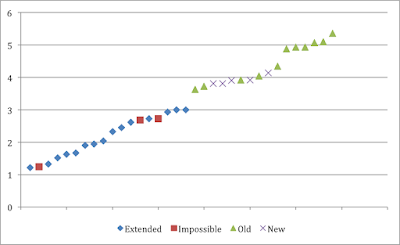 Table 1 shows the overall scores for each of the sentences and breaks them down into the four categories we had. Except for the impossible sentences, which we’ll come back to, the progression is more or less exactly as we’d have predicted.
If we wanted to come up with a ranking for ‘things that can be described as cheeky’, we’d expect it to go a bit like this:

So far, so good. What about the possibility that the UK is ahead of the curve for the new cheeky meaning?

We got most of our responses from the UK and the US, so we used broke everything down into three categories: UK, US and ‘other’ (with other including other English-speaking countries, but also people from non-English speaking countries). The next table uses the same ranking as the previous one, but because it’s grouped by country, the divisions between the various meanings are not included. 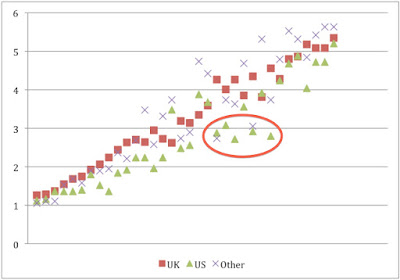 This table is much harder to make sense of at first glance: the rankings aren’t the same across categories so the progression isn’t as neat (we kept the overall order for the table). In general, though it shows that: 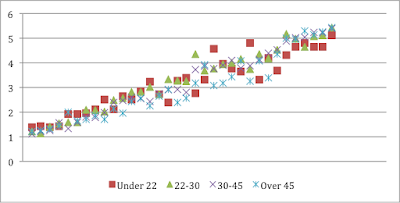 By and large, the progression is similar regardless of age. What jumps out though is the fact that the youngest group ranks the two cheeky Nando’s sentences very highly (two red squares on the middle right) – almost higher than the cheeky monkey, cheeky boy sentences. It seems from this that the younger you are, the more likely you are to use ‘cheeky’ in the ‘new’ way. (Note that we don’t know how ‘new’ it really is. The OED doesn’t have any citations with a cheeky pint or similar.)

So, there we are. We’ve only just started on this and still we have to do some proper analysis on it, but watch this space! These are our initial observations, and it looks like there’s something interesting going on here. This is one of the most exciting things about doing linguistics: a silly meme that was viral for about a week and then vanished highlighted both a regional difference in use of cheeky and a new-ish use of the word among younger people.

Have a cheeky day! (Or based on what we’ve found… maybe not)