Ian McMillan, the poet, does a lot of stuff on the radio about language. He's keen on accents, particularly Yorkshire ones, and recently I listened to a programme from August in which he tootled about in search of an isogloss; specifically, the house/arse isogloss. 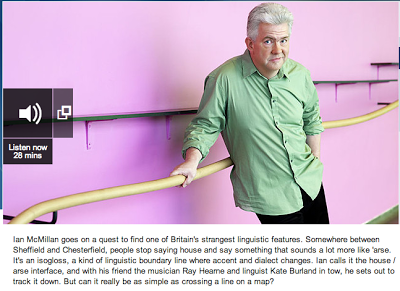 As the blurb notes, an isogloss is 'a kind of linguistic boundary line where accent and dialect changes'. Of course isoglosses are not fixed and absolute, so McMillan's early desire to hear someone stand on one side and say 'house' and stand on the other side and say 'arse' is doomed to remain unfulfilled.

The main point of the programme is that (according to McMillan) in some parts of South Yorkshire they pronounce 'house' as 'house' and in others they pronounce it 'arse'. That's /haʊs/ versus /a:s/, in the International Phonetic Alphabet that linguists use to represent sounds. (In fact, when McMillan says 'arse', it's more like /ɑ:s/, as it is for most southerners. However, he consistently pronounces it with a long version of the vowel in 'man' when he's imitating the pronunciation. Think Jim in the Royle Family.) You'll note from the symbols used that although the two words seem very different, all that's happening is that the 'standard' version has a diphthong (two sounds) and the 'arse' version simply ditches the second sound of the diphthong. We can call it monophthongisation, if we want to win at Scrabble.

McMillan is off, with a musician friend and a local linguist in tow, to try to find these people with 'one of Britain's strangest linguistic features' (I can assure you, it's not even close to that honour). What follows is a lot of highly unscientific questioning of bemused pensioners outside the post office as they turn up to collect their pensions. One, when McMillan asks him if he says 'arse', says 'no, I wouldn't like to swear'.

Anyway, there's a bit of linguistics in there, as we learn about isogloss maps (though it would have been good to follow up with an explanation of how they're drawn and why the line on the map is an idealisation of reality, and why you can't really find it in the real world). McMillan gets a bit mixed up at times, thinking that at the isogloss he should find people who say 'arse', whereas the isogloss is the border. It's precisely there that he might not find them - if he wants those, he needs to look in the heart of the area enclosed by the isogloss. The linguist says that it's likely to be old people who have this pronunciation, and it would have been nice to have been told why that is. But McMillan is a powerful character and most of the time must necessarily be given over to his impressions of other Yorkshire accents, which he clearly enjoys doing.

Something that struck me was that when McMillan was taking care to say the two different pronunciations properly, he would pronounce the /h/ on the 'house' version, and yet when he said it in his normal speech he very often didn't pronounce the /h/ (as is common all over Yorkshire). Even more interestingly, he sometimes merged the two vowel sounds a bit, and sometimes sounded very much like he was in fact saying 'arse', despite claiming to say 'house'. I'd really like someone with a bit more phonetics ability than me to check that he really does say 'house' when he thinks he does.

In the end (spoiler alert), they end up finding people saying 'arse' much further north than they expected (Hillsborough), and McMillan is happy he's found them and all is well. It's an entertainment programme, not a documentary, and we should take what we can get when it comes to linguistics on the radio. Worth a listen, if you're at all interested in poets from Barnsley saying 'arse' at pensioners, peppered with gobbets of linguistic stuff.

As an aside, I noticed an interesting pronunciation of 'house' the other day. McMillan is a Yorkshireman so he wouldn't set foot in the north-west, of course, but Stuart Maconie happened to say the word in a conversation with Mark Radcliffe on their BBC6Music radio programme. They were discussing the MediaCityUK complex in Salford, from where they broadcast, and mentioned the television building, which Stuart called 'Telly House'. He pronounced 'house' like 'ice' (/ɑɪs/ in IPA). I don't know where that's from. According to Wikipedia, Stuart's from Whiston in Merseyside, hung out in Wigan as a youngster, and now lives in Birmingham, and of course he spends every weekday afternoon with a load of Lancashire folk. It could be any of them. Perhaps if I tweet him this link he'll let me know what he thinks.