IT IS LITERALLY IMPOSSIBLE TO WRITE A SENTENCE WITHOUT GRAMMAR

Hooray! Another article about how 'textspeak' is bad for kids is out! (Daily Mail link, so don't click it – you can get the idea from just reading this post.)

It's really a shame that the experts they asked were not experts in the thing they asked them about. They're experts in children's potential and curriculum development, both important things, but not actually language, which is the thing we're concerned about the harm of here. It seems comparable to asking experts in primary education if mobile phone masts are harming children's concentration or something. They'll have relevant things to say about concentration but they won't actually have the expertise to say if it's the mobile phone masts that are the problem.

Anyway I just came here to say this: IT IS LITERALLY IMPOSSIBLE TO WRITE A SENTENCE WITHOUT GRAMMAR. 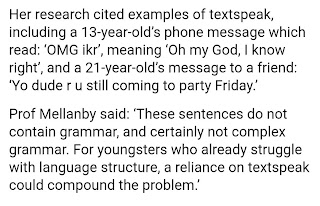 In the image above, Prof. Mellanby says 'these sentences do not contain grammar', of the following:

I'm just going to take the second one. It contains, among other things, the following grammar:

It also has 100% correct spelling, if one allows that r u is an abbreviation rather than an error.